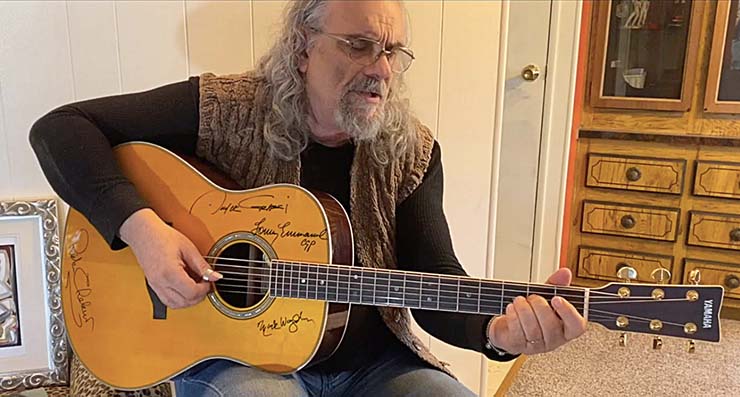 A fund raiser for the Bert Jansch Foundation

Working on the periphery of American and British Isles folk traditions, Guitarist/song-poet David Nigel Lloyd built a small but international reputation while working professionally as an arts advocate and teaching artist in the California counties of Kern and Siskiyou. He is also a member of a family of traditional singers which dates back at least to his great grand parents and continues unbroken to his niece.

Described as "an iconoclastic loner of acid folk," he accompanies himself on the 8-stringed octar, and on guitar in modified lute tuning. DNL has performed at folk venues in the British Isles, Canada and throughout the US. He is known to introduce his songs with jokes, True Facts, Tall Tales, and Outright Lies.

In 2020, David Nigel Lloyd became a Bert Jansch Foundation Around the World in 80 Plays player. His most recent album, Of Service in Rosemary Lane, is a response to the music of Bert Jansch, played on a guitar lent to him by the Foundation.

David will be joined for the evening by Chris Brain. Chris Brain renders songs embedded in folk tradition and the pastoral, with a contemporary resonance. Drawing inspiration from the outdoors and song writers such as John Martyn, Nick Drake and Joni Mitchell, Chris explores distinctive fingerpicking patterns and alternate tunings in his sound.

This show is a fund raiser for the Bert Jansch Foundation which supports young acoustic musicians in their early careers.